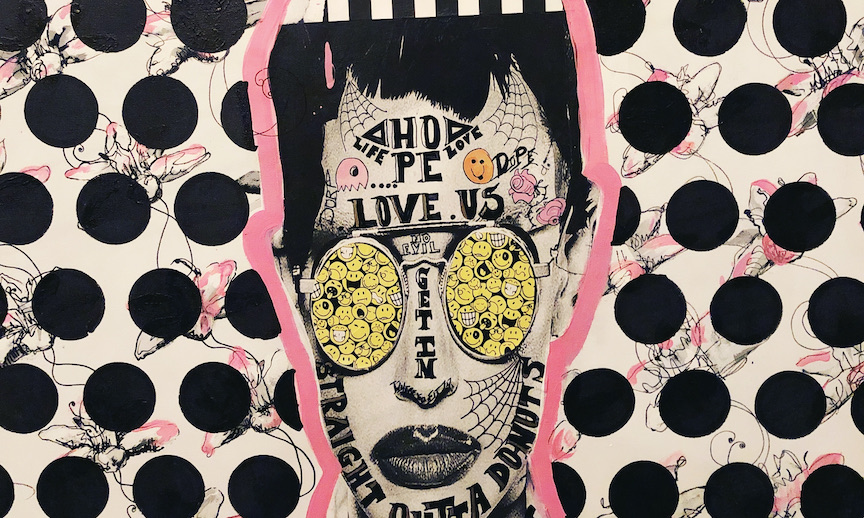 I’ve had this Matt Groening cartoon up near my desk for years:

It’s such a great encouragement.  Don’t let others get you down.  Even if people try to stop you.  Even if they don’t get you when you share your freaky self.  Keep on keeping on, and eventually they’ll come around.  They might even join you.  It gets better.

“Life in Hell” consistently expressed a darkly cynical outlook on life, so this strip a seemed a particularly sweet counterpoint.

I looked up “Life in Hell” on Wikipedia this week because I couldn’t remember the names of the characters depicted here. They are Akbar and Jeff. Groening described them, “They’re either brothers or lovers or both. Whatever offends you the most is what they are.” That made me laugh. I was also delighted to learn that this particular cartoon, the one pictured above, was the final one of the entire series, which ran for 35 years.

Be yourself. Enjoy being yourself. Other people might dig it, or they might very well not. Either way, it’s far, far better than the alternative — not being ourselves, or not enjoying it.

I try to remind myself that we can’t fail at this thing called Life. It’s not possible to get it “wrong.” We’re here simply to do the best we can, the best we know how to do, collaborating in and with all the conditions and circumstances in which we find ourselves.

It also really helps me to remind myself that everyone, pretty much, is always doing the best they know how. Even if how they are being seems woefully misguided, desperately unkind, or even cruel. Sometimes, I have to not just remind myself but actively work to convince myself that people are basically good at heart. Because, sadly, a lot of the time it really doesn’t seem that way.

But the thing is — even though we can’t really fail at Life, it sure can feel like it.  And it most feels like that is when we’re not being true.  If we’re afraid to live full-out our own ideals and values, we get out of whack, out of integrity.

So, I’ve found that the more I can muster in my own heart a belief in the general goodness of humanity, the more hospitable the world tends to occur for me. It becomes a place in which I feel empowered and free. It supports me working out what it means to be myself and lets me give space to others working themselves out. And in a world like that, where we’re generously granting each other permission to be, we’re all a lot less likely to be a-holes.

I haven’t yet done an official PRIDE message this month. June is LGBTIQA+ Pride month, and it’s just about over, so I guess this is it: BE YOU.

Manabi Bandyopadhyay is an educator and activist. She is the first transgender person to receive a PhD in India. I love this simple statement from her:

“Be yourself. The world will adjust.”

One way or another, it will adjust. It may adjust by joining you, as in the Akbar & Jeff cartoon, finally catching on and following your trail-blazing fabulousness. Or It may adjust in less graceful ways — let’s not kid ourselves — plenty of people experience ostracism, inequity, and violence for a long time before anything like acceptance. Still, though, what else are we supposed to do with our precious existence… not be it?

There’s another quote that I’ve been gnawing on since reading it on the wall of the Phoenix Art Museum at the Rudi Gernreich exhibit Travis and I saw a few weeks ago. Gernreich was a fashion designer in the middle of the twentieth century. Though now recognized as a visionary, he wasn’t unanimously appreciated by his peers or the press during his lifetime. His was a bumpy career, in part because he was an outspoken critic of the fashion industry, challenging what he perceived as its sexist and body-shaming beauty standards.

His longtime life partner, Oreste Pucciani, said this when accepting on Rudi’s behalf a posthumous special tribute award from the Council of Fashion Designers of America: “The moment of impact between the artist and the public is not necessarily a moment of recognition and appreciation. It is more often a moment of misunderstanding. From this misunderstanding, fame is born.”

There are a few words I might substitute to make it more generally-applicable, because I think this can speak to all of us, about all of us. So if you’ll allow me to paraphrase: “The moment of impact between an individual and the world is not necessarily a moment of recognition and appreciation. It is more often a moment of misunderstanding. From this misunderstanding, progress is born.”

I like this because it acknowledges and honors the fact that our unique, original self-expression isn’t always an easy-breezy joy ride. Sometimes we feel completely misunderstood or utterly rejected. When this happens, it’s tempting to hide. Perhaps we apologize, because we’ve bought into the idea there’s something fundamentally wrong with us. Or maybe we try to explain, because we believe that it’s our job to make sure others “get” us. Or we self-edit and carefully craft a protective veneer persona that we think will be more palatable and acceptable…

We all do all of these to some degree as we figure out how to be ourselves with each other. I suspect it’s not possible to avoid entirely, so let’s not add “inauthenticity” to the list of things wrong with us. We can give ourselves a break in this (and every) way.

However — AND — I think the key thing to recognize here is that when we experience these moments of misunderstanding, when we feel like freaks and outsiders, this does not mean that something has gone wrong! We can take it to mean, rather, that there’s an opportunity for our own and everyone’s growth and expansion. It means, as always, that there’s an opportunity for change, for progress.

The Universe is constantly completing Itself. Becoming Itself. Right now It is becoming and completing Itself through and as the fullness of you and me and everyone else on the planet. Our purpose for being here is to participate in this process. Sometimes that’s a rough freakin’ road, but that doesn’t mean there’s anything wrong with it.

Maybe that’s my final point — just that we need to get more comfortable with conflict.

We could all do with a little less conflict-aversion, conflict-avoidance. I think if we allow that sharing our uniquely freaky selves is always going to rub somebody wrong… And we also let that rub work both ways, when others are doing their thing in a way we might not like… If we practice recognizing such discord as a valuable creative tension necessary for the ongoing birth of the entire world…

We just have to stay in the conversation. The world will adjust, one way or another. If we keep creating together — together, creating whatever we create, which ultimately is our togetherness.

Join me and Patty Stephens for in-person Sunday service, 10am at Maple Street Dance Space. Or check out the message online Sunday evening at BOSQUECSL.ORG and VIMEO.COM/BOSQUECSL. Happy Pride, you one-of-a-kind miracles, you! XO, Drew

STUCK IN THE MIDDLE

We must always take sides. Neutrality helps the oppressor, never…

The Beauty of It

There was a video on social media a few weeks…