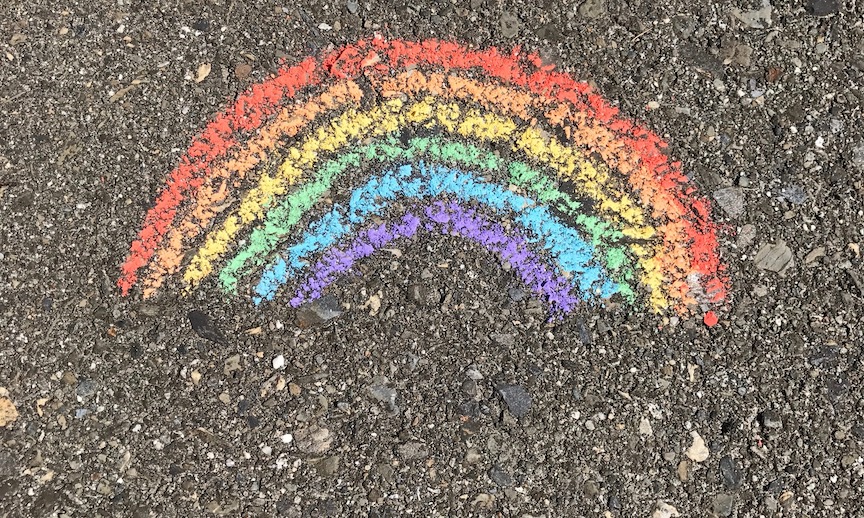 A few weeks ago several of us were waiting on Zoom for the rest of the team to join us for our monthly Board meeting, and the casual conversation was going something like this:

“How are you doing?”

It became a shtick as we realized quickly that we all had some version of this. We laughed about it as a check-in question:

What is your provisional “AS LONG AS” or “IF ONLY” —? The former props up a dicey and tenuous satisfaction. The latter stands in the way of it.

It’s good to ask, I think. Because most of the time we impose such stipulations on ourselves without even noticing that we’re doing it.

The “IF ONLY”s may be even harder to deal with.   They put our fulfillment, happiness, and contentment into a time and place that simply can’t be here and now.   I don’t know when or how, but definitely not here and now; this ain’t it.  Our good is always and forever something else.  We can’t access it unless or until things are different from how they are.  If only I were younger.  If only I wasn’t tired all the time.  If only I didn’t have this onerous project or person to deal with.  If only the government weren’t such a shitshow.

Oh boy, for sure, I’ve got a million of my own versions of both of these! I suspect that we all do. There’s something in here about humans’ basic orientation to the world. It probably started out biological and evolutionary, and has become psychological and sociological — we have a contentious, hostile, shaky, and uncertain relationship with our own lives.

If things are good, or at least good enough, if they’re okay, then instinct tells us that we’d better keep still right where we are and not tempt fate. Don’t make any sudden movements or it could all come crashing down around us. (That’s AS LONG AS).

If things aren’t good, or at least aren’t as good as we’d like, then how can we possibly be content?! There’s always something that could be better, that should be different. And until that condition is met, of course we’re going to be dissatisfied. (That’s IF ONLY).

The biggest impossibility in all of this is that our IF ONLY usually crashes right up against our don’t-upset-the-apple-cart inertia of AS LONG AS. So we get stuck — feeling unclear and frustrated.

It can be a useful dichotomy, as far as it goes. Sometimes it’s helpful to compare and contrast things. Maybe it’s aspirational, and we invoke a new possibility for ourselves when we speak of Unconditional Love, Boundless Abundance, and Perfect Peace. Sometimes, though, contrasting and comparing like this just makes us more miserable and leaves us feeling less able.

Also, I get a little annoyed when we talk about the Unconditional as what’s “true,” while the Conditional gets dismissed as mere “illusion.” For me, it’s more consistent to think of it ALL — the storms as well as the calm seas, the troubles as well as the blessings, the human frailty as well as the heavenly ideal — as ultimately integral to the Infinite Everything. I mean, that’s what infinity means, right?

I prefer to consider these conditions of our lives, then, not just as obstacles to overcome or illusory mires in which we’ve gotten stuck on our way to Life’s Fulfillment.  Quite to the contrary, in fact, these conditions in and of themselves represent the FULLNESS OF LIFE.

If it’s happiness we seek, then we’ve got to start out by claiming happiness. If it’s well-being, declare well-being. If it’s plenty, be plenty. If it’s peace, create peace. Not AS LONG AS something doesn’t intrude. Not IF ONLY things could be different. But as a possibility right now, in this, with this, as this — life just as it is and as it isn’t — with ourselves as the creative agents throughout.

And then we work out the kinks and bugs of it. I’m not saying that’s easy, necessarily. I’m not trying to be glib, or to oversimplify…

Indeed, it’s complicated as heck, and that’s kind of my point — the complications aren’t in the way, they are the way.

I was listening recently to an Agatha Christie mystery podcast in which Hercule Poirot said something like, “The piece of evidence that doesn’t appear to fit, that seems to confound or undermine the entire case, is in fact the very key to its authentic resolution.” (That’s a paraphrase, and now that I think of it, it may have been Conan Doyle’s Sherlock Holmes rather than Christie’s Poirot, but you get the point).

Here’s the thing: if we wish to embody or experience the Unconditional Good of something, the “spiritual truth” of anything, then we can’t ourselves be conditional about it. But at the same time, we can’t merely dismiss or ignore the inconvenient or undesirable conditions — we must address them as directly, honestly, and inclusively as we can.

I’ve been declaring and creating a new possibility lately:  BEING FAITHFUL, PLAYFUL, AND POWERFUL.  What I notice as I try this on is that sometimes simply claiming it for myself reveals it as instantaneously available.  Sometimes, though, circumstances and conditions call for a renewed commitment, or an attitude adjustment, or there’s an action to take, or maybe I have to look at how I’ve been playing the victim.  It’s not always comfortable, but in any case, I find that when I stick with it, it’s a tremendous relief to get back in the driver’s seat of my life.  I get to choose the music, and I get to say where I’m heading.  The key is to move with the world, not against it.

I can’t wait to be with you this week — online at BOSQUECSL.ORG, and/or VIMEO.COM/BOSQUECSL. New content is available every Sunday and thereafter, for you to enjoy any time at your convenience. XO, Drew

NEVER GONNA GIVE YOU UP

Maybe I should save this talk for Halloween because I…