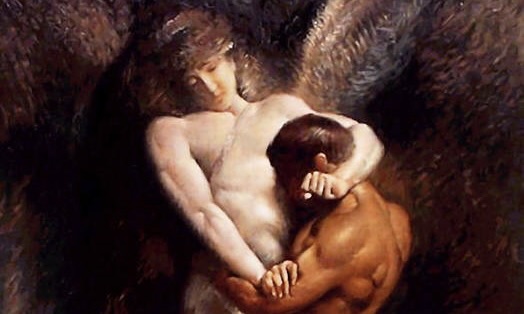 It occurs to me that this title could sound a little edgy on Thanksgiving Day, when a breezier gratitude theme might be expected. So let me say, first of all: Happy Thanksgiving, everyone! I am so deeply grateful to you and for you in my life.

In his final Thanksgiving address, President John F. Kennedy wisely said: “As we express our gratitude, we must never forget that the highest appreciation is not to utter words, but to live by them.”

For me, trying to abide by my words, to be authentic in my appreciation of life, to practice my values tends to get a little edgy. I mean, it takes me to the edge. As often as gains and progress, it involves stumbles and losses and confrontations. It’s rowdy, a rumpus. Definitely, it also includes wondrous and exquisite moments of peaceful, harmonious transcendence. But most of the time, exercising an honest faith feels more like a wrestling match. Wrestling my angels.

It’s not my intention to overthink this sweet holiday or to make it unnecessarily contentious. But I do have to admit that even my relationship with gratitude is something of a wrangle a lot of the time.

It seems like thanksgiving should be the easiest, or at least the most straightforward, spiritual practice — looking for and readily finding so much for which to be grateful. Indeed, a deliberate and purposeful gratitude can reorient our perception and effect an instantaneous transformation. So we should do it as much as possible.

But/And our affirmative spiritual philosophy also offers up another, more challenging, slice of gratitude pie. That is: to be thankful in advance for that which we wish to experience, that which we hope to receive, that to which we dare open our hearts even though it hasn’t yet been actualized.

Being grateful in advance for a society free from violence, injustice, and disenfranchisement. Being grateful as we imagine everyone having enough to eat and safe places to call “home.” Being grateful as an act of creation, envisioning into existence a world of kindness and beauty.

This is harder than counting the blessings we’ve already got.   At least, it’s harder to sustain.   Definitely, the follow-through is harder because it requires more than a feeling.  It’s where the JFK quote resonates.  Because it’s not just about saying it, even if we totally believe it in our moment of utterance; it’s about conscientiously living it.  And living it always gets complicated.  The process of actualization tends to call forth every opposition and forces us to reckon with the complexity.  Attempting to live it honestly means wrestling with doubt and fear.

What I’ve found is: my best outcomes in such contests of faith happen when I can find a way to embrace my questions, doubts, and fears. Not to vanquish them, but to integrate them.

I shared a few weeks ago that Travis and I had watched a few episodes of the Netflix series, Song Exploder. One was about REM’s 1991 hit, “Losing My Religion.” I was struck not only by the provocative title and lyrics, but also by a memory of the first time I heard the song on MTV. The remembrance came rushing back at me with such clarity and power that I am surprised that I haven’t already done a dozen blogs and talks about it.

I was a senior in college, living at the co-ed fraternity where I was a member. The house once had been part of a national frat, Phi Psi, but our chapter had disaffiliated and officially re-named ourselves “Panarchy.” We were weird and wonderful. One of my housemates had a brother who was a student at Harvard. The brother had come up to New Hampshire for a weekend visit before heading home to Pakistan. He had been called home by his parents, who were withdrawing him from school and arranging for him to be married as quickly as possible. This was happening because the family had found out that he was gay. I don’t recall how much of that story I knew before meeting him. I found out all about it, though, while he and I had an intense three-day affair.

My memory is that all weekend long, every time we ventured downstairs for food and air, REM’s “Losing My Religion” was playing loudly in the common room.

I associate this song with the terrible failure of religion to provide my friend with belonging and love, for himself and with his family. Also, I’ve got it tangled up with my own coming-out and a painful sense of “otherness” through that. I can’t say whether I was feeling rejected by religion or if I was rejecting it. Some of both, probably, and either way, it seemed pretty clear that God wasn’t for me anymore. “Losing My Religion” became the lead single on the soundtrack of my early 20s.

Now, though… considering it with three decades of hindsight, I can see that this soul-shaking reckoning wasn’t the breakup with the Divine that I thought it was at the time. On the contrary, it turned out to be an early, essential step as I developed a genuine spirituality of my own. It was time of questioning and agonizing doubt that, ultimately, enabled me to reclaim God in a way that enhanced rather than diminished me. And then allowed me to give myself to Spirit in a way that felt like a winged leap of joyous faith rather than a desperate fall into oblivion.

I had to lose something half-hearted in order to find a whole heart within. Rejection and reinvention, paradox and reconciliation, individuality and integration were all necessary parts of it. And these have continued to be defining elements in my gritty, frustrating, mind-blowing, questioning, argumentative, and vulnerable love affair with my own God and my own Life.

I’m so grateful. I’m grateful for all the goodness for which it’s easy to give thanks: friends, family, home, community, food, pleasure, laughter, light.

I’m also grateful for all the good that seems currently out of reach — the good I’m afraid is beyond us, the good I doubt we can get to, the good which is going to stretch and bend us and confound us and hopefully grow us as we grasp for it.

I’m not saying this to create extra work, to complicate things. I’m not looking for trouble on Thanksgiving. I’m just declaring a willingness to be with the bigger questions, to wrestle the angels as necessary. And I’m reminding myself that the highest appreciation and deepest gratitude is available only in our most authentic embrace of all of it — even the troubling parts, maybe especially those…

Have a beautiful Thanksgiving. I can’t wait to be with you this Sunday, November 27, 10:00am at Maple Street Dance Space. XO, Drew

Autumn is, without a doubt, my favorite time of year.…

Usually I’m much better at getting out ahead of the…