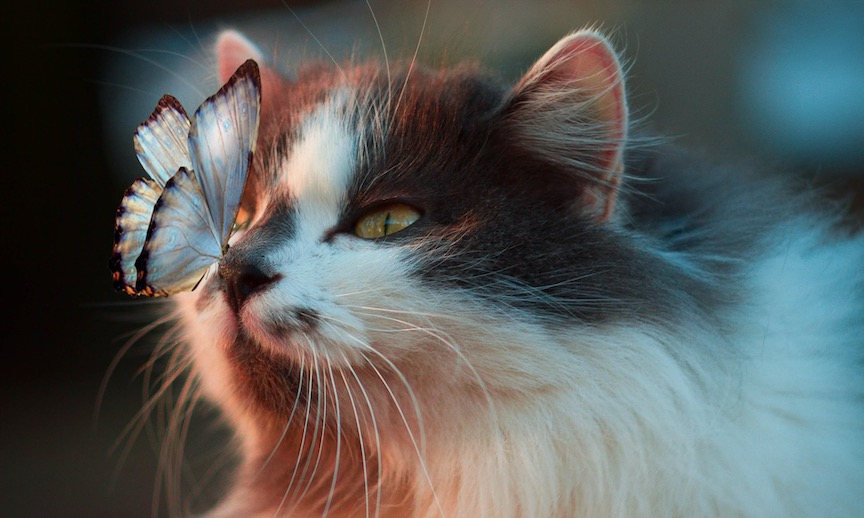 Anyone who’s ever had cats, or known cats, understands that their natural curiosity can lead them into trouble.

Our little guy, Danny, suffered a pretty serious back or pelvis injury, which he totally brought on himself, about a year ago.  We didn’t witness the accident, but we think he was pulling on a tablecloth and brought a heavy iron planter down on top of himself.  That’s what it looked like in the aftermath, anyway.  I’m happy to report that after a long slow recovery, he’s okay.   I doubt that he’ll ever again be a great jumper, but that’s not necessarily a bad thing, at least not bad for us.  He still manages to get up to plenty of mischief even with a physical impairment.

We continue to admonish him, several times a day, “Get out of there! Stop that!” Sometimes we say, “Don’t you remember what happened last year? Curiosity killed the cat, Buckaroo!”

I started thinking about that phrase — curiosity killed the cat — where it came from, what it really means.

It occurs to me that while often apt for kitties, it may not be a great adage to take on for ourselves. It seems a mistake to cast curiosity in such a negative light. I mean, poking your nose in where it doesn’t belong, trespassing, being meddlesome and minding other people’s business — sure, don’t do that. But curiosity doesn’t just mean being a busybody. And it doesn’t have to mean being naughty, like little Danny Cat.

I really don’t love how the adage reads like a blanket warning against curiosity in general, promising dire consequences.

Indeed, we’re probably more likely to get into trouble if we stray from the straight and narrow, but sometimes it’s really good to get up to a little trouble. Yeah, questions can open up cans of worms, but usually I’m all in favor of setting those worms free. No doubt, things might be simpler and easier in some ways if we never wondered or wandered, if we kept our heads down and our noses clean, right there against the grindstone. But I expect that things would also be terribly, terribly dull.

In the 17th century, Thomas Hobbes wrote, “Curiosity is the lust of the mind.”  I don’t know much about Hobbesian teaching — whether he was suggesting it as a good thing, or something to be quelled — but to me it sounds fairly delicious no matter what Hobbes was saying about it.  “The lust of the mind.”  The mind’s passionate and ravenous desire…

Our Science of Mind philosophy extols the promise of expansive consciousness, the creativity of thought, our ability to envision and actualize new experiences for ourselves and for the world. It seems to me that curiosity in this regard is not just an asset but a necessity. If we want to create anything other than what we’ve already always created, we’d better start asking more questions, not fewer. Be more interested and engaged in what’s possible. Be more curious.

Through a bit of online searching I’ve learned that what first killed the cat, in the original aphorism, wasn’t curiosity but care.  That’s curious, right?  That care was thought to be the life-threatening trait.  Care in the sense of worry, overthinking, being unduly concerned about someone or something.  Playwright Ben Jonson wrote the phrase in his satire, Every Man in His Humour, which was performed by William Shakespeare’s company.  Then Shakespeare quickly stole it about a year later for Much Ado About Nothing:  “[T]hough care killed a cat, thou hast mettle enough in thee to kill care.”

The character Claudio is saying to his friend: “Lighten up.” That’s often great advice. And it’s a good line, a catchy phrase. But I’m not all that keen on it as a philosophy for life.

Surely the answer to our problems isn’t to care less about them. It seems to me that rich and fulfilling lives usually call for deeper engagement, not lesser. Greater interest, a wider, more inclusive vision. Sure, let’s hold everything as lightly as we can, not taking ourselves more seriously than we need to. But to suggest that care is deadening for cats or anyone seems pretty far off. From where I stand, more often than not, care is the very thing that enlivens us. Even if it’s messy, even if it invites uncertainty, even if we have to stay with the process rather than plunging headfirst into a tidy solution so we can slam the door on our inquiry and stop thinking about it.

Hm.  I’m not sure that this is exactly what I was thinking of for a Thanksgiving message.  Shrug, okay.  It’s what came out.  I will say that I am very grateful for our curious, active, inquiring, lively minds.   And for our caring, loving, deeply connected hearts.  I’m grateful for you, and for us together, full of curiosity and care.  It’s quite thrilling!  Happy Thanksgiving, friends.

Join me with the sublime Patty Stephens on Sunday, November 28, 10:00am, at Maple Street Dance Space. XO, Drew

A friend and I were talking politics.  Because even though…

I had a dream last week in which I was…