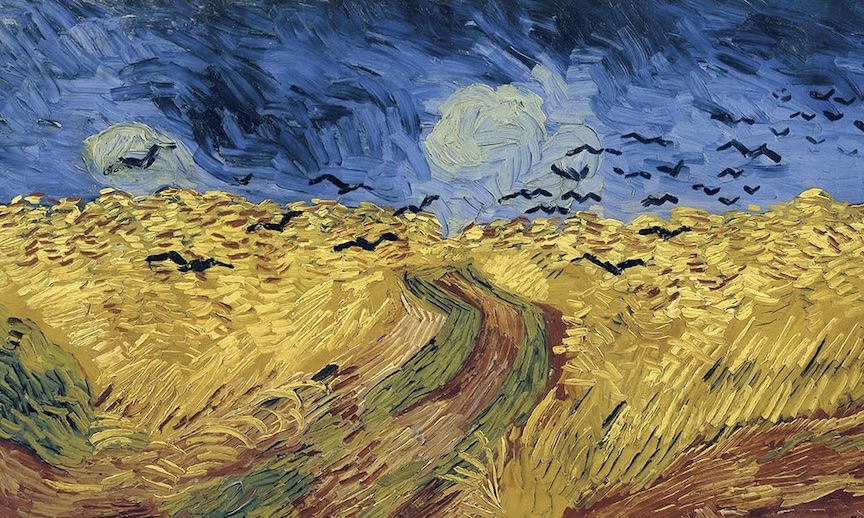 “I experience a period of frightening clarity in those moments when nature is so beautiful. I am no longer sure of myself, and the paintings appear as in a dream.”

People usually talk about clarity as if it’s the opposite of doubt and confusion. Like it means having the answers, knowing what to do, being confident and steadfast and true. Clarity such as this sounds real good on its surface.

Van Gogh described it, however, as a frightening revelation. Clarity for him was an experience in which self-assurance faltered, when the beauty of it all became overwhelming, disorienting, and dreamlike. Clarity was a discombobulating epiphany, an exquisite encounter with something great and unknowable, a creative force of its own — the numinous.

I don’t know how many times I’ve longed for clarity of the first type — unwavering, sure-footed, right-minded conviction. I imagine how breezy, simple, and straightforward life would be if I had more of that. I pray for it. I spend a ton of time trying to figure out and organize and talk my way into it.

But then when I do experience moments of true insight — glimmers that feels like genuine clarity (instead of just stories I’ve told myself so many times that I’ve finally convinced myself to believe them) — rarely are such moments simple or straightforward.  Rather, clarity tends to be confronting and challenging.

Clarity reveals uncomfortable things I’d tried to hide from myself. It uncovers fundamental dissonance and contradictory priorities and disagreements and paradox. It illuminates the boggling complexity of everything, the universes within universes of everything. It shows me that I’m not always right. And even when I am right, that mine isn’t the only right way to look at something.

Clarity seems to blow my mind more often than easing it. Dang it.

One of the things I love most about life is its surprises, its variety, and its deep, gooey complexity. A constantly changing world full of perpetually becoming beings, all interconnected in labyrinthine ways through identity and relationship and community. Philosophies and feelings, science and magic, unfolding in a thousand dimensions all at once.

True Clarity has to include all of that.

It seems, as a society, we’ve forgotten how to disagree with each other without hating each other.

I’m not pointing fingers, I’m as guilty as anyone. I’m real quick to amp up differences of opinion, snowballing minor disagreements into years of resentment and grievance, until everything feels like a be-all-end-all-or-nothing. This town ain’t big enough for both of us! This friendship, this family, this world isn’t big enough… But that’s not how I want to be in it, with it.

I think the problem might have something to do with our desire for the first type of “clarity” — certainty, simplicity — when what the Universe is forever offering up is the second type of Clarity — a colorful Van Gogh swirl.

Most of us crave to have The Answer. To be Right. If we could be sure we were on the right track, we’d stand firm and march tall in the direction of our dreams. We imagine that we’d never doubt or waver or waffle or fail. We’re good people after all, with the best of intentions, so what could possibly go wrong if we could simply be a little more self-assured about it?

Problem is, even when we have our answers, even if they’re good answers, they’re not the only answers.  Though our feelings and ideas are completely valid and absolutely worth sharing, they’re not the only worthy feelings and ideas.  Indeed, our personal perspective is not only going to be different from others’, it will be in direct opposition to others’.   And while, sure, some of those others may be misguided or ignorant or broken, honestly so are we.

None of us can possibly see the entire picture, so we actually need each other’s distinct and contradictory vantages if we’re going to get anywhere near the Whole Truth. Even the opinions I don’t want to hear, the ones that seem undeniably wrong-headed or mean. Even my own self-contradiction and ambivalence and relentless doubt.

So — I’m going to try to include in my prayer for Clarity not just a spotlight to reinforce my own point of view, but also a Clearing. A clearing in which difference flourishes. A clearing where disagreement engenders appreciation and allows for unique, new harmonies. A clearing where synergy and collaboration emerge, a Wholeness greater than the sum of its parts.

I can’t wait to be with you this Sunday, January 15, 10:00 am, at Maple Street Dance Space. With the divine Patty Stephens. XO, Drew

GOD IS MY CO-AUTHOR

I hit a wall this week. I crashed into an…