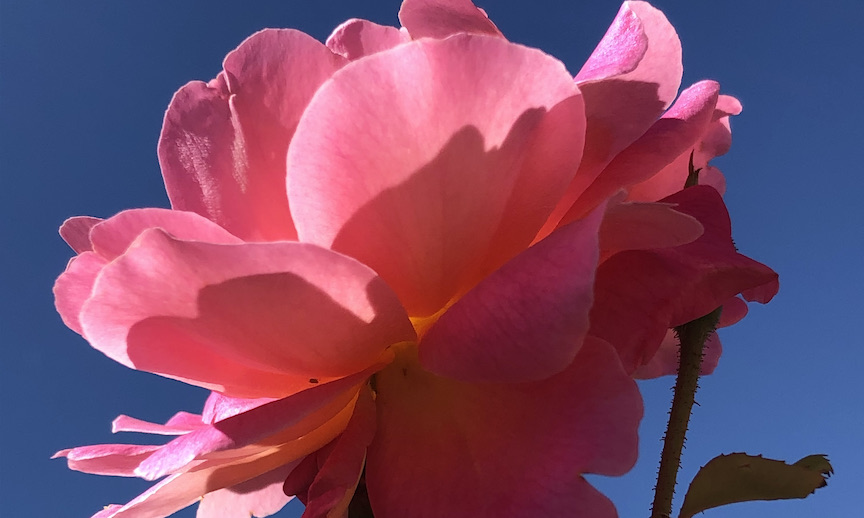 Shakespeare’s Juliet muses, “That which we call a rose by any other name would smell as sweet.” She’s not wrong — if it looks like a duck, walks like a duck, and sounds like a duck, it’s probably technically a duck even if we name it “Giraffe.”

But I’ve been thinking about the Thing-Quality-Idea that I usually refer to as God, and how that can smell really different to different people in different contexts, depending on the various names we use for It.

Like Juliet, I’m inclined to ask with an offhand air, “What’s in a name?”   Why make such a big deal?  In many ways, I completely get that a thing is a thing no matter what we call it.  A lie doesn’t become truth simply because we insist on its factuality.  Giving a fancy French description to the poop pancake on the menu doesn’t turn it into a delicious dessert.

But on the other hand… also like the young lady Capulet, I have to recognize that how we identify people and things (and how things and people get identified by others, by society) can be quite definitive.

Sometimes re-naming can be transformational. Calling something differently can utterly metamorphose it. This is especially true of our experiences, right? Experiences are mostly subjective; they occur uniquely for each of us. So we have oodles of creative latitude with them — we can shift and reshape our experiences by naming and framing them differently. We can transform a setback into an innovation-opportunity, limitations into clarity of direction, and grief into a deeper awareness of our love.

Of course, we can’t change what’s already happened. We might not be able to change what’s happening. But absolutely we can empower ourselves to meet our circumstances right now and to transform them going forward. And naming is one of the key ways by which we do it — naming the experience, naming ourselves, and naming the context it which it’s all occurring…

Which brings me back to “God.” Ugh. It’s such a loaded word/name. It’s been used to justify so many atrocities and so much hurt. Really, I don’t have to wonder why so many people are utterly repelled by it.

But then again, I really dig it. I’ve done quite a bit of soul-searching to reclaim the word as a positive. I get that others might prefer different names — Universe, Life, Divine Love — and sure, I like those, too. But for me, it feels a little inauthentic to put much energy into shying away from “God.” I wish I didn’t have to come up with a bunch of euphemisms just to make sure that nobody mistakenly thinks I’m referring to a white-bearded judge in the sky sitting on a cloud smiting the unfaithful with lightning bolts. For the record, that’s never what I’m talking about!

Still, I have to reckon with the fact that when I mean to elevate a concept or thing, to recognize and invoke the sacredness of it, calling it “God” might get in the way for some folks.

I might say “God is Everything” — meaning that, for me, God is the Ultimate Connected Oneness of which we are all essential parts. But someone else might hear “God is Everything” as a cultish devotion to superstitious anti-scientific hucksterism. While my intention can be the loosest definition inviting the broadest invitation to non-dogmatic togetherness, a whole lot of people are put off simply because I use that G-word.

A couple of weeks ago, Travis and I were out at breakfast, and a guy sitting at the next table struck up a conversation with us. We chit-chatted a little and he asked what we did for a living. This is usually a weird moment for me when I meet someone, because I know that they’re likely going to have all sorts of mistaken preconceptions and prejudices as soon as I say, “I’m a minister.” Sometimes they seem almost embarrassed and quickly change the subject. Sometimes they start to tell me about their own salvation experience in the loving arms of Jesus Christ. So I tend to go overboard with far more explanation than was really requested. This gentleman wasn’t particularly disconcerted, however.  I told him what he did, and he simply asked, “What faith?” Which was a reasonable follow-up question. I don’t remember exactly how I described it this time, but I didn’t feel like I was stammering around the way I sometimes do trying to explain New Thought and the Science of Mind. I ended up telling him something like, “I’m an Agnostic Minister.”

It was kind of freeing. Because what occurred to me in that moment was that when most people ask about someone’s faith, they’re really asking: What do you mean by God? What’s in that name?

For me, a key component of that Name-Concept-Experience is Its ineffability, Its undefinability. Thus, it seems pretty accurate to call myself “Agnostic” not because I don’t believe in It — I do! Like I said, I think it’s literally Everything. I just mean that Everything must include an infinitude way beyond my comprehension.

Go ahead and try to make sense of that. As they say, it passeth understanding.

My friend recently told me that she longed to have some of my faith, my spiritual outlook on life. I told her I expected that she did, that she probably just called it something else. She said, “I believe in Science.” I said, “God by another name.” Tomato, tomahto.

I guess the main thing for me in all this is that when I say, “God,” I never intend to turn anyone off because the whole point of God is to turn ON.

Which is why so often I get lost in over-explanation, and usually end up sounding like a crackpot to strangers. Because at least as far as “God” is concerned, I know that there’s a whole lot in that name, an entire universe of meaning. In it, there’s everything and then some, including plenty of room for misunderstanding each other, and I don’t know how to verbalize that very well.

So if that name doesn’t light you up, PLEASE USE ONE THAT DOES.

Call it Rhubarb Pie or Mathematical Pi, call it You, call it Us. Call it Geraniums and Art, Justice, Ancestral Wisdom, Hope for the Future, Fortitude, and Compassion. Call it whatever lights you up, whatever makes you feel connected and alive, whatever fills your heart with song and makes the world shimmer with a little more meaning and purpose. That’s what I mean by “God.” By any other name, it smells and lives and has its being exactly as we call it forth in our own experience.

I can’t wait to be with you this weekend. New content online every Saturday by 6:00 pm at BOSQUECSL.ORG and VIMEO.COM/BOSQUECSL. We’ve got 14 months of great stuff up there. I will continue to post a weekly talk even after we resume in-person Sunday services on June 13, 10:00 am, at Maple Street Dance Space. Have a glorious week, you Gods, you. XO, Drew

Lighting a menorah for the eight nights of Hanukkah has…