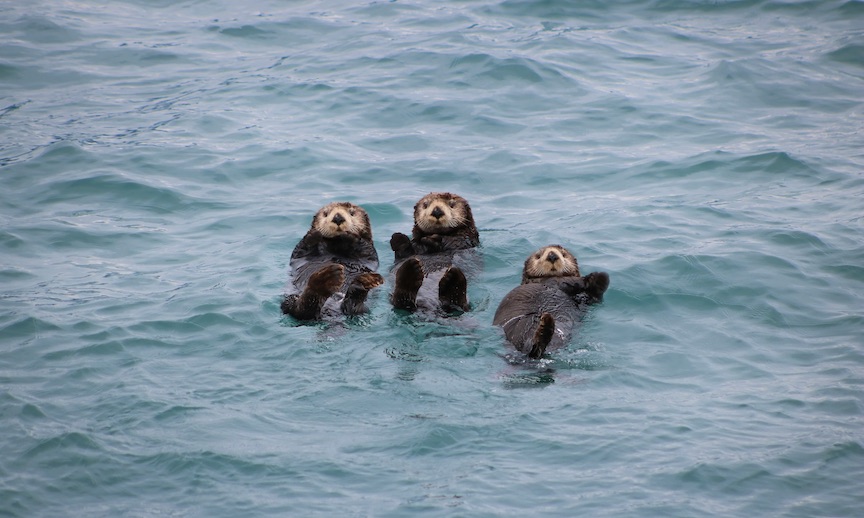 A few weeks ago I listened to a podcast about sea otters in the Pacific Northwest. Otters are one of my spirit animals, so I was emotionally invested from the start. And this story took me for a spin, let me tell you.

It began with an account of nuclear tests devastating this already-seriously-endangered species and ended with the possibility of otters saving the friggin’ planet.

In the late-60s, the United States conducted a series of nuclear tests on Amchitka Island, part of Alaska’s Aleutian archipelago. The tests were considered a great success — the bombs went off as the government wanted them to. It was far from humans, but right up close to Soviet territory, so I’m sure the location seemed perfect. Alas, it was also one of the final habitats of the sea otter.

Sea otters had been hunted almost to extinction over the previous centuries because of their ridiculously plush coats. But a few places were so remote that the fur trappers didn’t bother, so there remained tiny populations of sea otters here and there. Amchitka Island was one of these.

Fortunately, just before the bombings commenced, someone thought, “Maybe we oughta try to save some of these critters.” Good thinking. Even though thousands of otters were annihilated in the blasts, conservationists did manage to relocate about 700 otters to the coast of Washington.

Where they have flourished. Flourished in a way that has turned a story of displacement and loss into one of triumph and redemption.

I quoted John Muir last week, and I’m going to do it again:“When we try to pick out anything by itself, we find it hitched to everything else in the universe.”

Sea urchins are one of otters’ favorite snacks. Because otters have to eat constantly to maintain their body temperature in cold northern waters, they eat a lot of urchins. When the otters were hunted out of existence in the 18th century, sea urchin populations exploded. Sea urchins like to nibble away at the base of kelp. So, over the course of two centuries, without otters keeping them in check, the urchins decimated the kelp forests that used to flourish in the pacific northwest — such places are called “urchin barrens.”

Kelp forests are essential to global carbon capture. An acre of kelp forest processes five times as much CO2 as an acre of terrestrial forest. No otters = too many urchins = no kelp = devastating impact on ocean temperatures and climate change.

Now, however, the descendants of those refugee 50 years ago, have rehabilitated the kelp forests on the pacific coast. The kelp is back, converting CO2 to O2 like mad. While this alone obviously doesn’t solve all our other environmental problems, it’s a really good thing. And as the otters thrive and expand their range, this enables more kelp forest to grow. Marine biologists hope that it won’t take too many years for these ocean forests once again to span the entire western US and Canadian coastline.

Orson Welles said, “If you want a happy ending, that depends, of course, on where you stop the story.”

It also depends on where you start the story, the parts of it you emphasize, the points of view with which you identify…

I was reminded of another account of otters that I read a few years ago. This also occurred in the northwest. A river otter somehow made his way into the Chinese Garden in Vancouver, British Columbia. Nobody knew how he got there, smack dab in the middle of the city. He camped out at the koi pond and immediately ate eleven of the fourteen adult koi. It was all over the news, capturing the imagination of Vancouver residents, who took passionate sides — Team Otter and Team Koi. The debate got very heated. Team Koi declared the situation a metaphor for the gentrification of Vancouver’s Chinatown and the loss of that cultural awareness and heritage. Team Otter pointed out that the entire city is built on the otter’s natural habitat, so it’s unfair to blame him for the fact humans brought valuable, decorative (and delicious) fish into his territory.

Of course, both of these perspectives are right on. And the ultimate truth includes both, as well as the myriad other ways one might look at the situation.

These two otter tales feel like a good frame for some of the ideas I’m mulling-over this week: The interconnected nature of Everything… The stories we’re telling about It… The possibility of a mutually-empowering shared reality that includes your perspective and mine, their story and ours…

What if we did unto otters as we would have them do unto us?

Using it as my title gives away the punchline to…

I don't remember why, but for some reason, I was…