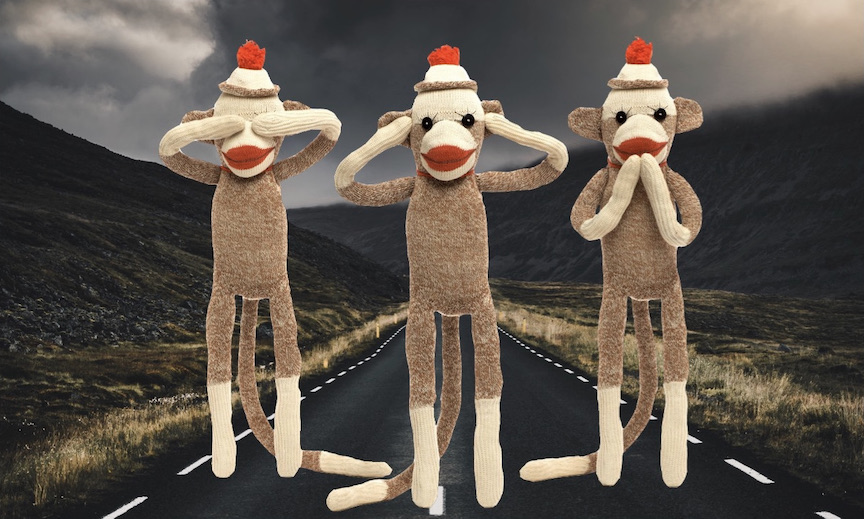 A few years ago, a Polish proverb hit social media. This saying was everywhere all of a sudden: “Not my circus, not my monkeys.” I’ve seen it on T-shirts and greeting cards, on coffee mugs and baby onesies. It’s catchy and cute. It sounds old-fashioned, like your grandmother’s great-grandmother’s wisdom.

Turns out, it’s not that old. It was first expressed as a political dig in the early ‘90s. The leader of the Polish United Workers Party was criticizing the Prime Minister’s governing style. I don’t know if he was criticizing her for being too meddlesome or too hands-off. Either way, it’s a good line, and I hope his speechwriter got a big bonus for that one.

I’m sure I’ve said, “Not my circus, not my monkeys,” many times over the past decade or so, trying to remind myself that I can’t worry about everything all the time.

I can’t. It’s just too much! It can’t all be my concern, my problem, my priority. This is a vast and complex world with a gazillion cares and causes, never-ending projects and competing interests, all vying for everyone’s precious time and attention. It’s so easy to get distracted and overwhelmed. And sometimes we need to nudge ourselves gently back into focus: “Those aren’t my monkeys.” This call to clarity and simplicity, to take things one step at a time, is very appealing. Folksy, catchy, and an invitation to give ourselves a freakin’ break — of course it became a meme.

A few weeks ago… I don’t remember with whom I was chatting, but a friend had asked something seemingly simple, like, “How are you doing?” And I responded with a wail of anguish. About the world being a mess and how my desk was a mess; about environmental catastrophes and the cats’ overflowing litterboxes that I didn’t want to deal with; about humanitarian crises around the globe and unhealed relationships in my family.

I don’t think I laid it all out in two neat columns like that, universal and personal. Still, I could hear that in my complaint and I summed up the cataclysm of it all with, “And all of that reveals as much about my state of mind as it does about the state of the world.” Like, not only is it a jungle out there, but to top it all off my own crappy attitude is just making everything worse! AAARRRGGHHH

Afterwards, I was thinking about that and wondering if I could apply a little “not my monkeys” to the emotional deluge, sweep out some mental clutter and freshen up my perspective. And, yeah, that’s not a bad approach: taking on everything all at once is sure to make life seem insurmountable and impossible.

However/But/And what also occurred to me was: maybe this is my circus. Maybe these are all, in fact, my monkeys.

What if the entire occurring world is, to some degree at least, my own reflection? And yours, and theirs, and ours. And what if we didn’t make this mean that we’re to blame, but instead took it an on as a super-empowerment to create something marvelous and new?

I mean, sure, we all know that when we’re feeling inundated with a sea of troubles, that can make a litterbox look like a tsunami. AND — I’m encouraged by the thought that life can and does work in the other direction, too. A subtle shift in our own minds and hearts, a minor accomplishment, a tiny ripple can make all the difference in the world.

Part of this means that we have to stop vilifying the monkeys.

In Buddhism, the unsettled mind, chattering away, intruding upon our peaceful meditation, is sometimes referred to as the “monkey mind.” The term was adopted by Taoism and other philosophies as well. It’s a prevalent analogy in New Thought, and I get it — it seems apt. Our restless minds can seem pretty annoying. Sometimes, the “monkey mind” gets lumped in with the “ego.” It’s derided as the part of ourselves that we wish would just shut the hell up and get out of the way so we could finally experience the blissed-out perfection of our true spiritual nature.

Unfortunately, trying to silence the monkeys tends to cast them out into the world. And they still don’t really leave our heads and hearts; they just start coming at us from every direction, within and without. It would be one thing if we could banish them and then really disavow them, “Not my monkeys.” But that doesn’t work. They become shadow-monkeys, which are even harder to deal with!

I think the only thing to do with them, really, is to learn to love them. It takes practice and patience. Owning our monkeys, recognizing them as integral and essential to our wholeness and to the wholeness of the entire blooming world.

My circus, my monkeys, and I love them.

I can’t wait to be with you this Sunday, at 10:00 am, at Maple Street Dance Space. The choir will be singing. We’re masked for in-person gatherings. You can also watch the talk online Sunday evening at BOSQUECSL.ORG. XO, Drew

I’ve been touched this week by the idea of bigger…

THAT’S WHAT FRIENDS ARE THOR

I try to keep my toenails pretty because I dance…