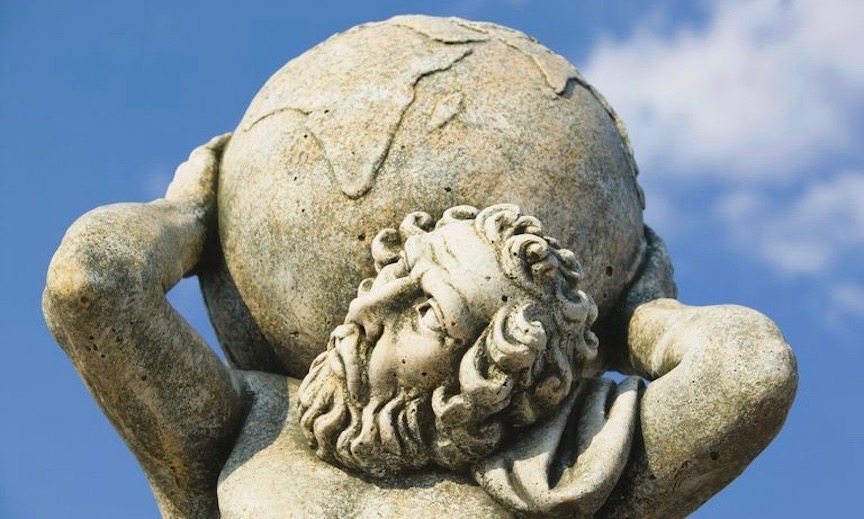 This is not to suggest that we’re better off in ignorance and apathy, not at all. By all means, let’s love fiercely, be mindful and aware, practicing ever-widening circles of care. That’s how we fill our lives with meaning and purpose, and ultimately how we create together the beautiful world we want to live in. I’m just acknowledging that sometimes, often even, this is danged hard.

I’ve shared with you before that I grew up in a family of workaholics where every day was like a competition to see who could drag across the finish line the most exhausted and wrecked. If one of us mentioned fatigue, my mother would marvel, “You think you’re tired?!” She’d then proceed to itemize the unspeakably ambitious to-do list her day had entailed, all that she’d accomplished along with everything that remained to be done. We were forced to concede that she’d won the hard-work, heavy-lifting game, and we’d pin a medal on her for having the most punishing life.

I know I’ve still got some of that in me. The thought of a crossed-off to-do list makes me salivate. I do know that this isn’t always the healthiest way to approach every day. Even if it encourages productivity, I don’t really believe that the point of it all is to work ourselves to death.

So for decades now I’ve been searching for something like “spiritual ease.” I want at last to attain the understanding that can make life seem lighter, breezier, and less demanding of struggle and martyrdom. Or, better yet, what I really want is the secret to having it not just seem lighter but actually making it be lighter. I want to be super-productive and impressively high-achieving, while at the same time feeling heroically effortless and peaceful about it.

I’ve prayed for ease. I’ve meditated with the intention of letting life’s ups and downs flow through me unobstructed like water. I’ve scrutinized every thought and belief, and exercised my creative consciousness to untangle this boundlessly soaring spirit of mine from all mental burden and limitation.

And I’ve discovered that while, indeed, I’m able to recognize and release some habitual ways of being that create extra hardship (because unconsciously I value suffering, or because I fear I haven’t really earned my place on the planet, or whatever). But I’ve also discovered that no matter what I think and believe, life still includes plenty of hard work — physical, emotional, psychological, and spiritual. We’re still charged to slog through tough times with broken hearts carrying heavy burdens.

Considering this, I’ve gotten some titles and phrases stuck in my head. Frankly, they’re bugging the shit out of me this week: Don’t Sweat the Small Stuff (And It’s All Small Stuff); All You Need Is Love; He Ain’t Heavy, He’s My Brother.

Of course, each of these aphorisms has something true and sweet to offer. Unnecessary worry and stress don’t do anybody any good. However — AND — I find myself arguing with these one by one:

But if we are able to acknowledge freely our heavy concerns and responsibilities, then at least we can relieve ourselves of the burden of having to prove how evolved we are by how effortlessly we appear to carry it.

And maybe if we allow that humanity inevitably includes sweat and hardship, and we let ourselves be human, then we can see that we’re really not in it alone. We are sharing in all of this. It’s plenty heavy, but if we lift together, we can do it.

I can’t wait to be with you this Sunday, February 9. Bosque Center for Spiritual Living service at 10:00 am. I love you guys. XO, Drew

WORLD PEACE AND A BAG OF CHIPS

Thomas Merton wrote, “Those who are not thankful soon begin…

I’ve been re-watching The Great British Baking Show. If you…