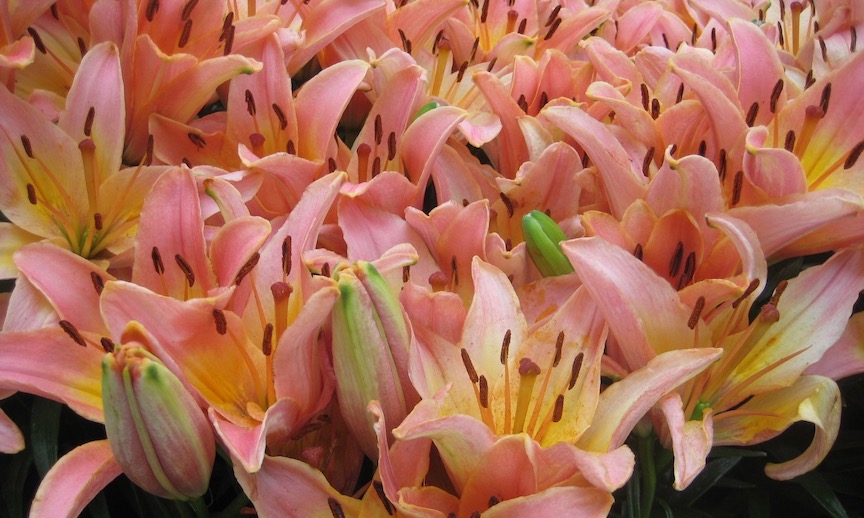 I know I write a lot about my Dad. I hope it’s not too much. It’s just that Robert LaFollette Groves was my hero, truly an extraordinary human being. And I’m not sure that I expressed that to him nearly enough while he was alive. He’s on my mind at this time of year, especially — Palm Sunday, the week before Easter.

Dad was a florist. He owned a shop with a number of greenhouses in Oneonta, NY. Every year, on Palm Sunday, he hosted a spectacular flower show, an open house to which hundreds (thousands?) of people would come. Every work-surface, cooler, plant stand, and shelf was filled with imaginative displays. The gardens were all in bloom and/or decorated with glorious arrangements. It was an enormous undertaking that required months of planning, ceaseless devotion, and colossal effort. He did it annually, for decades.

When I was about twelve years old, Dad had a massive heart attack over Palm Sunday weekend.

Doctors told us later that the first cardiac arrest actually had occurred on Saturday, the night before the show. Dad admitted that he had known “something wasn’t quite right” when he collapsed in pain, and had to crawl up the stairs to his office on his hands and knees for a brief rest in the middle of his all-night overnight preparations. I may not be getting the medical history exactly right, but I believe he had several more coronary incidents throughout the next day, as he stood smiling and greeting open house visitors for eight hours. Only after the event was over did he allow Mom to take him to the hospital. They told us that the damage to his heart was extensive, and that he might not make it.

He did, thank God. We had him for another 30 years, almost. He sold the shop, it was just too much to manage, but he went on working there as a designer for about 25 of his remaining years. He also got involved in community theater. And continued directing the church choir. And sang additionally with a community chorus and a chamber music group. And tended a huge vegetable garden and greenhouse at home. And briefly took oboe lessons just because he’d always liked the sound of that. As I said, a remarkable man.

My Dad was passionate and unstoppable. One might also reasonably conclude that this behavior was freakin’ nuts.

This incident — Dad working through several heart attacks, barely pausing for a breath — was one of the defining moments of my adolescence. Forty years later, I still can’t tell if I’m totally inspired by it or if it’s more of a cautionary tale. Both, I guess. On the one hand: OMG YES! And on the other: HELL NO! It certainly informed, for better and for worse, all my subsequent ideals about duty, commitment, and work.

On the downside, Dad wasn’t demonstrating a whole lot of self-care. I mean, clearly. In part, no doubt, his workaholic tendencies were a response to the fears of inadequacy with which most of us wrestle at one time or another. I try really hard to resist the pull of overwork as a compensation for unworthiness, but it’s a sneaky trap I fall into again and again. There’s an insidious and pervasive notion that we need to earn our place, that we have to prove our right to be here, and only by working ourselves half to death might we be able to atone for our fundamental contemptibility. Ick.

But there’s definitely a positive interpretation as well, though. The plus side of Dad’s dedication, relentlessness, and rigor is the fact that he really LOVED his work. Sure, he had work-life balance and boundary issues.  And giving everything his all, like it or not, was part of his natural temperamental makeup.  But I believe that the main reason Daddy poured his whole heart and soul (and time, and body, and identity) into most of the things he was up to was because this was an authentic expression of his great love for Life.

And that absolutely is an example to which I aspire. That, to me, looks like success. To spend my time, energy, passions, gifts, and talents — giving my absolute all — to things that I care about.

This passage probably gets quoted too much, but that’s because Shaw really did say it best:

“This is the true joy in life, the being used for a purpose recognized by yourself as a mighty one; the being thoroughly worn out before you are thrown on the scrap heap; the being a force of Nature instead of a feverish selfish little clod of ailments and grievances complaining that the world will not devote itself to making you happy. I am of the opinion that my life belongs to the community, and as long as I live, it is my privilege to do for it whatever I can. I want to be thoroughly used up when I die, for the harder I work, the more I live. Life is no ‘brief candle’ to me. It is a sort of splendid torch which I have got hold of for a moment, and I want to make it burn as brightly as possible before handing it on to the future generations.”

That’s a rousing call to action, for sure. But it also requires practice, mindfulness, and poise.

Because you’ve gotta ask: When does this represent tenacious, creative fortitude, and when does it become something more like apologetic, obligated martyrdom?

I don’t know where that line is, exactly. But I’m in a fairly constant inquiry about it. Here are some of the questions I try to remember to ask myself, especially when I’m feeling run-down:

Nine years ago, on Palm Sunday, I began leading weekly worship celebrations and delivering weekly sermons. In preparation for that first service, I honored my father by making hundreds of tissue-paper flowers, which I shared with everyone in attendance. I still have some. They’re pretty.

I was thinking about that earlier this week… thinking that it might be fun to make flowers for you when we’re able to get together again in person… when I heard the news about yet another mass shooting.

Week after bloody week, people are being killed by assault weapons in America. I don’t know how many hundreds of times over the past nine years I’ve had to decide, “Should I go ahead with the sweet talk I was planning, or do I need to pivot so I can address more directly this latest fucking tragedy?” It’s another line I can’t rightly identify. So I’ll do what I usually do and try to do both, somehow.

Another great image I’ve got of my Dad is a photo from World War II. He landed in Normandy, D-Day+2. He was part of the Infantry Division that liberated Buchenwald concentration camp in 1945. He talked very little about his military service, and I cannot even imagine the horrors that this sensitive, artistic, gentle man experienced.

I have a picture of Dad in a field in Belgium, in uniform, collecting wildflowers.

Obviously, I don’t know his motivation, but it appears that he simply was hoping to make things more beautiful in his tent or wherever he and his fellows were sheltering. Amidst overwhelming atrocity, fear, and death, Dad picked flowers. He was doing his duty, fulfilling an obligation, in a situation that almost certainly felt like the farthest thing in the world from his natural inclinations. And he picked flowers.

It reminds me somewhat of the famous image of the Vietnam War protester sticking a carnation into the barrel of a soldier’s rifle.  Though in Dad’s case, I don’t expect that he was making a statement but was simply following his heart.

I guess the point around to which I’m finally working myself is: one of the ways we heal the world is by healing our own hearts.

Practicing mindfulness around how we’re spending our precious time — the quantities and qualities of our work, our play, our commitments, our relationships. Paying attention to the ways in which we value and honor ourselves, or not. By taking responsibility for our approach to life — as a drudgery to be slogged through, or an opportunity to bring ourselves fully to it.

Of course this doesn’t stop all bad things from happening, but I believe that it helps, even if only a bit. At the very least, hopefully, it means that I’m doing my part to contribute a little more joy and a little less despair to the world. A little more passion, a little more devotion, a little more beauty… I’m calling that “Flower Power.” Thank you, Dad.

Join me online this weekend, and every weekend, for message and music at BOSQUECSL.ORG and VIMEO.COM/BOSQUECSL. New content Saturdays at 6:00pm, available ever after at your convenience. XO, Drew

Using it as my title gives away the punchline to…

In ballet-afrique dance classes with my amazing friend Romy Keegan,…