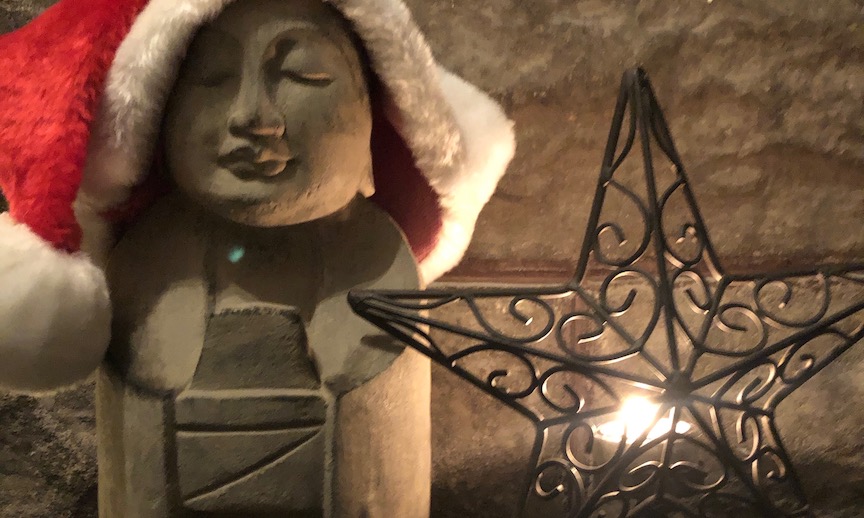 My seasonal playlist has been on loud and constant for about a week now.  I’ve been feeling the Auntie Mame admonishment, “We need a little Christmas, right this very minute.”  So Travis and I have decked the halls and put the lights on timers, and I’m blasting carols pretty much all day long.  I add to my collection a little every year, usually one song at a time, and now I’ve got over 18 hours of holiday music on shuffle.  It gets me through.

There’s quite a lot of duplication because there are only so many Christmas songs out there (and even fewer Hanukkah songs).  I have 7 renditions of O Holy Night, which is one of my very favorites, but sometimes several of them come up in succession and I wonder if it’s all a bit much.  There are other, rarer tunes which seem like special treats when they play — if I only have one version of it, I might hear it only once or twice a year.  Some of these are original compositions, non-traditional pieces.  Some are songs that I’ve never thought of as holiday music, but they showed up on an artist’s Xmas album and I thought, “What the heck?  Let’s try it!”

One of these is a duet of Mary J. Blige and Barbra Streisand singing, “When You Wish Upon a Star.”  Amazing, right?!  I never would’ve considered it for the holidays, but it’s exquisite.  [I’m going to pause right here and take a break to go listen to it again… Ah, that was nice.]

So, now, I’ve got stars on the brain — specifically, the idea of wishing on them.  “If your heart is in your dream, no request is too extreme.  When you wish upon a star as dreamers do.”

This isn’t that far off from the journey of the Magi in the Christmas Nativity, following a star across the land to honor the birth of peace & joy & hope into the world.  As I think about it, now, this song makes perfect sense as a Christmas tune, and I wonder why others haven’t recorded it.  Maybe Disney keeps the rights locked up.

In any case, I wish…

I believe in the power of wishes.  A wish can spark something new — an adventure, a project, a family, a career, a life, a revolution.  It starts with our imagination, but needn’t remain there because an inspiring wish calls forth the support of helpers and guardians; usually human ones, but maybe sometimes also genies and fairy godmothers.  I definitely don’t discount the magic of wishes.  Everything sparkly begins with a wish.

But then, on the other hand, at other times, merely wishing for something can seem a pretty limp and lackluster approach.

I’m trying to discern what makes the difference.  How can the same phrase — “I wish…” —  sometimes sound like a robust trumpet announcing all new creation, and in other ways occur like mewling victimhood.

I think it’s a matter of what we think we’re wishing upon.

This cartoon makes me laugh, but damn it’s cynical.  And it makes me realize how often I wish from a place of cynicism, fatalism, and despair.  Wishing with low expectations, resigned to the story that things rarely turn out how I want, wishing that things could be different but not really believing they might be.   Or I embed my wish in regret: the insidious idea that I should’ve done something differently or made different choices, that I missed my chance and it’s too late.  I wish I hadn’t, or I wish I had, I woulda-shoulda-coulda…  None of these is much of a wish.

I want to say that these are wishes of little power.  But I think actually, they are pretty darned powerful, just not in the way we really want them to be (or wish they were).   There are several flavors of this sort of negative wishing.  I think it’s worth teasing them out a little just so we can watch out for them when they come up.  They’re sneaky and they’re everywhere.

WISHING UPON LACK AND LIMITATION.
Whenever our wishes are born out of a sense of what isn’t, what we don’t have, then we perpetuate the experience of something being wrong or missing.    It’s why Buddhism teaches the transcendence of desire — because to want, wish, or yearn for anything tips easily into feelings of discontentment and suffering.  [By the way, Happy Bodhi Day, everyone.]

This is tricky, because one might reasonably argue that we don’t need to wish for anything that we already have, so wishes can’t help but come from a place of lack.  But I’m going to suggest that we consider the difference between what is not and what is yet-to-be.  The difference between seeing something as missing and seeing something as possible is all the difference in the world.  To wish upon something that does not exist is wishing upon unreality, and of course that tends to be fruitless and disheartening.

To wish upon a possibility, however, is a completely different game — it creates an opening for existence, for new actualities and experiences.

WISHING AS MAGICAL THINKING.
Despite what I wrote a few paragraphs ago about not discounting the magic of wishes, I do think we need to be careful with this — superstition isn’t very helpful.  My mother used to say, “If wishes were horses we’d all have a ride.”  I don’t know who first came up with that, but Mom drilled it into me so deep that I can scarcely think “I wish” without that shitty sing-song aphorism echoing through my brain.  It basically dismisses wishing as the opposite of action.  Wishing is a silly trifle, a flight of fancy, even lazy compared to life’s more substantive approaches like diligence, willpower, work, common sense, discipline, self-denial, duty…  Ugh, that Puritan work ethic still sticks.

Okay, so I agree that idly wishing without putting any oomph behind it is unlikely to produce much in the way of concrete results — “all wishbone and no backbone,” to paraphrase Elizabeth Gilbert.  But I want to know who the hell decided that wishing was incompatible with activity.  That part seems utter nonsense.

Of course dreaming and doing aren’t the same thing.  But, still, most doing begins with a dream, doesn’t it?  Imagining and implementing aren’t the same, but nothing was ever implemented that wasn’t first imagined, for heaven’s sake.

WISHING UPON DISAPPOINTMENT.
It’s so sad when the phrase “I wish” leads into an expression of regret.  For sure, if we could go back and do it all again, most of us would make some different choices.  But it doesn’t work that way, so regret ends up being both heartbreaking and useless.  It’s a variation of the wish upon unreality, wishing for a different past, which is disempowering in and of itself.  But it also chokes off our experience of the present.  It smothers the life emerging now, the possibilities pressing into the world now.

I think the only way out of this is to figure out how to declare NOW a new slate, a fresh start.  And I don’t have an easy answer for how to do this, but I’m pretty sure it ain’t gonna happen if we insist upon giving our wishes away to the past, wallowing in stories of failure, disappointments in ourselves and others, and disenchantment with life.  We’ve got to let it go, dear hearts.  We must forgive ourselves and whoever else we need to forgive and allow ourselves to wish again.

What are we willing to believe is possible now?

When you wish upon a star…  What we wish upon matters.  What we wish upon is, in the end, everything.  The wishes that twinkle the most brightly are wishes upon things in which we can really believe — whether that’s candles on our birthday cake (our lifetime of experience), or a coin tossed in the well (a benevolent universe), or a vision board, or a prayer.

Let me suggest that whatever trappings we give it, ultimately we’re always wishing upon ourselves.

For good or ill, each of us perpetually is wishing upon what we see as our own potential, our own souls, and our relationship to everything.  This Self, the deepest truth of our being, may seem remote or immediate.  It can appear impossible or inevitable.  We may imagine ourselves powerless or very, very effective.  And however it seems, however we hold it, is totally up to us.  We’re the only ones who get to say — and we’re always saying it one way or another, if not in so many words.

The stars that we wish upon are within us and with us.  They are the Stars of Bethlehem beckoning us onward.  They are the stardust of which we’re made, both physically and metaphysically, intimately and literally connecting us to everything in the Cosmos.  And wishing upon these stars — you, me, us, this — THERE IS SUCH GREAT POWER HERE.

I’m not talking about pie in the sky wistfulness, but wishing as a direct invitation and a resounding call to action.  Not just grumbling discontentment with how it is, but taking responsibility for ourselves and purposefully meeting how it could be.  Wishing like this can be an honest anchor into the here and now, with everything just as it is.  THIS is where we begin.

When you wish upon the star that you are… When we wish upon the constellations, the galaxies, that we are together… dreams do come true.

Our weekly celebrations are online every week — a new talk and beautiful music every Saturday by 6:00 pm.  It’s all on the website (bosquecsl.org), on vimeo (vimeo.com/bosquecsl), and on facebook (facebook.com/bosquechurch).  It’s also available and shareable forever thereafter, at your convenience.

“When we try to pick out anything by itself, we…

I just finished a lovely book by Jedidiah Jenkins, To…